All About Raspberry Pi 4 Model B

Today, Raspberry Pi is releasing a completely new version of its popular line of a single-board computer. The Raspberry Pi 4 Model B is the fastest Raspberry Pi ever, with the company promising to have it completely upgraded and re-engineered.

You will be able to recognize the price of Raspberry Pi 4 by simply looking at its size and shape. It will be much easier for the users to just drop their new Raspberry Pi into their owned old projects for an upgrade. The developers have also made sure that all the software is backward-compatible. So, whatever you create on a Raspberry Pi 4 will work on any older models that you own. 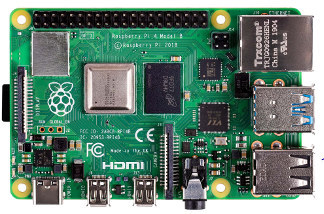 According to the customers’ feedback, running two monitors at a time, that too in 4k, has been made possible. The speed and performance of this new Raspberry Pi 4 is also a step up from earlier models. The developers have also built a complete desktop experience. Whether you are editing documents, juggling spreadsheets, drafting a presentation, or browsing the web with a bunch of tabs open, you will find the experience quite recognizable and smooth, but on a more cost-efficient and energy-efficient machine.

The Raspberry Pi 4 runs silently, since it is fan-less, and uses less power than other computers so far. This machine also comes with Gigabit Ethernet, a Bluetooth along with onboard wireless networking. The USB capacity has also been upgraded; you will also find two USB 3 ports along with two USB 2 ports, which can transfer data of up to ten times faster. Meanwhile, the developers are working to make different variants of the Raspberry Pi 4 available, depending on how much RAM the users will need- 1GB, 2GB, or 4GB. For now, the Pi has 0GB of storage, you will need to pop a MicroSD card in to load an OS and run programs. Raspberry Pi says that Pi 4 will remain in production until at least January 2026.