Earth Day Summit: Biden Administration vows to achieve a 50% reduction on US emissions

President Joe Biden set a new target for the United States this decade to drastically reduce greenhouse gas emissions. The country’s current target is to cut greenhouse gas emissions by 50 to 52 percent from 2005 levels. It greatly increases former President Barack Obama’s willingness to reduce emissions by 26 to 28 percent below 2005 levels by 2025 under the Paris climate agreement, which he made in 2015.

After the Paris Agreement was signed in 2015, the need for the United States to reduce its climate emissions has only increased. As the second-largest emitter of greenhouse gases after China, the United States has a significant role to play. However, under former President Donald Trump, who briefly pulled the US out of the Paris Agreement and dramatically scaled back environmental legislation in the US, it relinquished leadership on the climate front.

According to Pete Ogden, vice president for energy, climate, and the environment at the United Nations Foundation, “[the Biden administration is] quite cognizant that the US as a credible player and leader in this space really depends in large part on getting a very robust new target.” 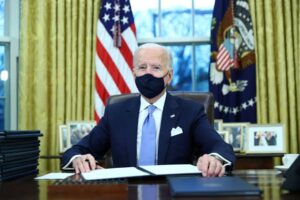 Major environmental organisations, such as the Sierra Club, have pushed the Biden administration to set a goal of at least a 50% reduction. Hundreds of companies, including Amazon, Apple, and GM, followed suit.

During Biden’s climate summit this week, more countries are expected to raise their aspirations. On April 20, the United Kingdom declared that by 2035, it intends to reduce greenhouse gas emissions by 78 percent compared to 1990 levels.

In a statement about the latest forecast for 2021 emissions, Fatih Birol, executive director of the International Energy Agency, said, “This is a grim warning that the economic rebound from the Covid crisis is currently anything but sustainable for our climate.” “We are likely to face a much worse situation in 2022 unless policymakers across the world act quickly to start cutting emissions.”