Indian airlines at the brim of another risky fiscal year, restructure plans and seek aid

Private airport operators in India alongside those in four metros, have sought cash assistance from the government. The urgent SOS seeks, among other things, “salary support for airport employees to avoid any potential job loss due to sustained low level of operations for such a long period.”

The Association of Private Airport Operators (APAO) sent an 11-point communication to the Union Aviation Ministry earlier this week, which stated, “Struggling to keep operations running, and worried about a much larger financial impact this year. It has now reached a critical juncture in terms of ensuring the continuation of safe and secure airport operations and is in desperate need of financial assistance to survive.”

The 11-point relief requested includes “expanding GST input tax credit; lowering the GST rate on output services from 18 percent to 12 percent; disbursement of overdues from Air India; salary support for airport employees; and a special line of credit or working capital loan on an unsecured basis at a subsidised rate with a moratorium of at least two years.”

The credit amount should cover the cash flow gap for at least 24 months, or until the business returns to normalcy.”

It has also asked for a “moratorium on debt servicing obligations, as well as an extension of the suspension of the Insolvency and Bankruptcy Code until March 31, 2022.” 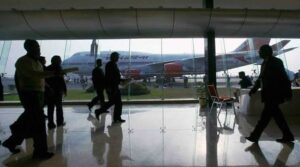 With the continual of Covid-19 spread, the Indian airlines are under a lot of pressure to raise cash or risk having their planes repossessed by lessors.

The passenger traffic has fell by nearly 30% in April compared to the month before, and now is half of that in May, forcing even the country’s largest and wealthiest airline IndiGo to prepare for the worst.

IndiGo’s parent company, Interglobe Aviation, will meet on Friday to consider an equity boost, just months after dropping plans to raise up to Rs 4,000 crore ($543 million) in response to the financial crisis.

Despite the fact that IndiGo is considered a survivor, analysts say that the situation is much worse for smaller carriers, especially those without large sponsors.

According to aviation consultancy CAPA India, airlines lost $4-$4.5 billion in the recent fiscal year and have a probability of losing a similar amount this year.

Analysts expect that a recovery in domestic travel, which was expected by the end of 2021, will not occur until at least the first quarter of 2022. The high infection rates have led many countries with which India has bilateral agreements to operate charter flights, such as the United Kingdom and the United States.

Following the shut down of regular international flights by the Indian government, the charters offered a lucrative revenue stream for local carriers. According to CAPA, international traffic will only be able to return to pre-COVID levels by 2024.

Analysts believe that smaller carriers, such as SpiceJet Ltd and GoAir, a privately owned company, could face pressure to reduce capacity, find partners, or merge, especially as aircraft lessors take a tougher stance.

According to CAPA, 250-300 planes will be grounded in the first half of this fiscal year, and lessors might not be as cooperative as they were last year in allowing overdue repayments now that air travel has resumed in places like the United States and China.

It’s also unlikely that the debt will be discharged.

GoAir plans to raise up to Rs 2,500 crore through an initial public offering, according to local media reports from March, but the appeal to investors is dwindling as the COVID-19 situation worsens.

Despite the fact that IndiGo, which purchased 44 new planes from Airbus last year, has not postponed lease payments, leasing industry sources say SpiceJet missed payments even before COVID-19, and its financial statements indicate it has delayed payments throughout he crisis.

According to a SpiceJet spokesperson, payments to lessors have always been made on negotiated terms, both before and after Covid. Any aircraft being returned is either planned or mutually decided upon, depending on market conditions.

If the market recovers, any carriers with repossessed planes can face difficulties.