Irony at its peak, Marketo gang claims to have bids on stolen data of an IT service company, Fujitsu

Fujitsu is a leading IT service provider in Japan, and yet a hacker group claimed on 26th August 2021 that they have stolen at least 4GB of their data and are going to sell it to the highest bidder on dark web. The group confirmed fact on their leak site and have also given some proof of the company’s confidential data.

Marketo published on their leaked site that they have 280 bids but later changed it to 70 bids on Monday, 30th August.

Fujitsu however had low opinions on this matter, they said that the data appears to be just related to customers and not linked to their own systems. As per ZDNet, they also rejected the theory of the marketo group being related to the hacking incident in May when cybercriminals accessed data of Japan’s government officials via Fujitsu’s ProjectWeb platform. 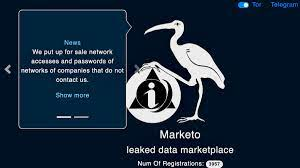 Claims on data stolen by Marketo doesn’t necessarily have to be legitimate but the group’s previous encounters indicates the group’s veracity in data leakages, according to a cyber threat analyst Ivan Righi who works with Digital shadows. He added that this group does not associate itself to a ransomware group but works in the same way to extort ransoms from its victims. It is unclear how marketo obtains data but it is suspected that they acquire data from other ransomware hackers that have successfully infiltrated a company.

Brett Callow, a ransomware expert who works at Emsisoft believes that Marketo claims shouldn’t be taken seriously since most of the companies on marketo’s victim list is noted to be recently hit a ransomware attack, and at the end of the day these people are lawbreakers that are known for their deceitful nature.