Byju’s is now the global partner of the International Cricket Council from 2021 up till 2023. This agreement will witness Byju’s partnering all the events under ICC for three years, which also includes events of the Men’s T20 World Cup inIndia and the ICC Women’s Cricket World Cup in New Zealand.

“We are excited to have Byju’s on board as one of our global partners and look forward to having a great innings together. Cricket is a sport where resilience, perseverance and conviction are crucial qualities and the partnership with Byju’s will allow that to be fostered by a wider audience both young and old. We look forward to the successful convergence of education and sports and hope to reach the hearts and minds of millions of young cricketing enthusiasts through this partnership,” – chief executive at ICC, Manu Sawhney.

“We are excited to partner with ICC in championing world cricket. Sports is a big part of life for most Indians and cricket, in particular, holds a very special place in our hearts. It is a matter of pride for us as an Indian company to represent our nation on a global platform like this. Just as cricket inspires billions across the world, we too as a learning company hope to inspire the love of learning in every child’s life,”- said the founder of Byju’s, Byju Raveendran.

Pradeep Poonia is still stuck in the ongoing controversy of WhiteHat Jr.’s supposed behaviour of not taking criticism sportingly alongside recruiting an unqualified faculty and exaggerated advertisements to fool its target audience. Pradeep Poonia had provided evidence for his allegations and has brought forward his discontentment oj this association of Byju’s with ICC because Byju’s has bought WhiteHat Jr. for $300 M.

He expressed his helplessness regarding power play and his capability to not be able to spend so much on court proceedings. “The case is still in Delhi High Court, the next hearing is on 9th April. They have a lot of money and a bunch of lawyers to drag this case for years while I become penniless. For the first hearing, they got India’s ex-Attorney General of India, Mukul Rohtagi to represent them,” he said.

Another user expressed his take on the ongoing matter as he saw the comment getting deleted and took a snapshot of the same coincidentally. The user with the name as Omkar Sonawane (identifies himself as a Cloud Architect | AWS & Azure Certified Professional) said that he was about to like the comment posted by Pradeep Poonia when a message popped up on his screen as “post not found”. 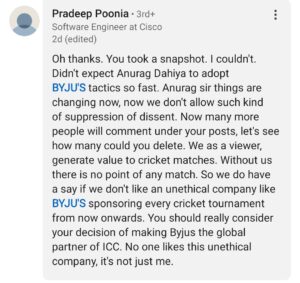