The Farmer’s Protest controversy now goes beyond the country border.

The 18 year old activist, Greta Thunberg had tweeted in favor of the farmer’s protest and was not the only one to do so amongst the International faces who paid attention to the ongoing protests in India. But now Greta is caught up in a controversy and her stand in favor of the protestors has seemingly been given the term of a ‘conspiracy’ in the form of a pro-Khalistani attempt.

In the first week of February, as the farmer’s protest entered into the next phase of its up till date inconclusive fight against the farm bills, the area in and around Delhi saw internet shut down in an attempt to slower the momentum of the protests. On February 3, the 18 year old activist made a tweet, accompanying an article by CNN about the internet cut off in and around Delhi. In the tweet she said, “We stand in solidarity with the farmers #Farmersprotest in India.” She further added another tweet to this thread, but that was deleted within some time.

The tweet said, ‘Here’s a toolkit if you want to help,” accompanied with a document that she shared for others seeking help, entitled “Global Framers Strike- First Wave.” There were two other account names mentioned in this tweet, that of @FFFIndia and @XRebellionInd. But this tweet was eventually deleted and another updated version of the toolkit was posted. As per the reports by Indian Express, the toolkit had five links in the name of “More Information-Important links.”

What were the links provided in the toolkit?

The toolkit consists of a set of guidelines under the titles: URGENT ACTIONS and PRIOR ACTIONS to support the farmers. The urgent actions involves support actions like that of tweeting in favor of the farmers using #Framersprotest #Standwithfarmers, calling or mailing government authorities, signing petitions. Alongside this, it consisted of a suggestive action plan of organizing ground action near the closest Indian Embassy, Media House or the local government office, on February 13/14 and also appealed to share the pictures of the same.
The set of actions under the Prior Actions category appealed for participation in ‘Digital Strike: #AskIndiaWhy’ and then tagging Prime Minister Narendra Modi’s official twitter id in the same alongside other state heads and noteworthy personalities/ organizations. The toolkit further provided for options like “watch out for (or join) the Framer’s march…”
The Delhi Police Cyber Crime has registered an F.I.R. against the toolkit creators for inciting or proposing to wage war against the government administration and concerned authorities. “The unfolding of events over the past few days, including the violence of 26th January, has revealed copycat execution of the ‘action plan’ detailed in the toolkit” , said Praveer Ranjan, Special CP (Crime Branch). He added that a deeper probe into the matter revealed that the toolkit was created by the Poetic Justice Foundation (PJF), alleging it to be a pro- Khalistani Foundation. On the contrary, the Foundation issue a statement saying that there was no involvement from their part into the directing of any protest activity in India.

People who have got arrested/ alleged to be linked as the creator of the toolkit so far?

Disha Ravi is a 21 year old BBA student and a climate activist, also one of the founding members of the Fridays For Future (the account that was tagged in the tweet made by Greta Thunberg, FFFIndia). The Additional Public Relations Officer (Delhi Police), Anil Mittal said “She was one of the editors of the toolkit Google Doc and a key conspirator in the documents’ formulation and dissemination.” The Delhi Police asked Google for email ids of the involved parties. The police conducted raids and arrested Disha Ravi and another activist and lawyer Nikita Jacob.
The Delhi Patiala Court, on Sunday remanded Disha Ravi for five days in the absence of her lawyers. The Delhi Police alleged that the legal team of Disha Ravi was intentionally missing in hope for a judicial custody in place of a police remand. On the other hand, the court said, Disha Ravi was appointed a counsel from Delhi Legal Team for the hearing. The two other suspects, Nikita Jacob and Shantanu, have non-balliable warrants been issued against them. 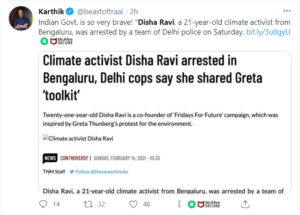 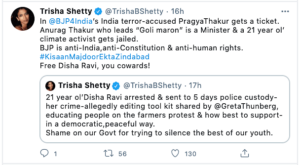 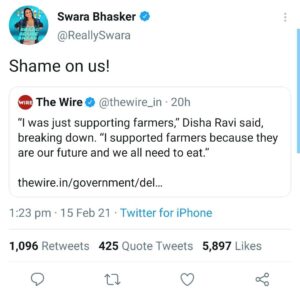